WHEN CHURCH IS PROVIDING AN ONLINE VIEWING OF THE FUNERAL SERVICE CHECK THE FOLLOWING LINKS:
https://glcna.online.church 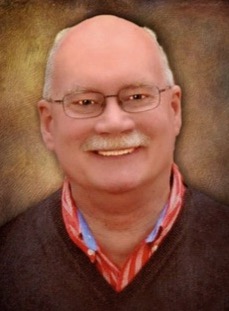 Craig Michael Miller, age 37, passed away Friday, October 30, 2020. Craig was born September 28, 1983 in Corydon, IN. He was a warehouse laborer and attended Grace Lutheran Church. He was preceded in death by a sister, Angel Vanoy. Surviving are a daughter, Shyanne Miller of New Albany, IN; mother, Brenda Hansel Waldridge-Miller, New Albany, IN; father, Kirby Miller; brother, David Waldridge (Christina) of Corydon, IN; sister, Judith Hope Miller of New Albany, IN
Private graveside funeral was held at Woods Chapel Cemetery, Ramsey, IN. Swarens Funeral Home, Ramsey, IN was in charge of his arrangements.

Tyler Jack Henderson, son of Jason & Michele Henderson, is being received into the family of God through Holy Baptism on Saturday, October 24, 2020 during the 5:00 pm worship service.

Grayson Jay Berry, son of Ronnie Jay Berry Jr. and Elizabeth Nichole Warren was received into the family of God through Holy Baptism on Sunday, September 27, 2020 in a private ceremony. 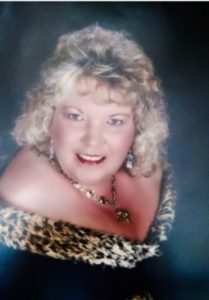 Dottie K. Allen, 63 years of age passed away on September 22, 2020. She was a retired custodian with the University of Louisville Belknap Campus and a member of Grace Lutheran Church in New Albany, Indiana. Dottie was preceded in death by her father, Leo Polen, and brother, David Polen.

James (Jim) E. Robinson, 61, Elizabeth, IN, passed away unexpectedly Wednesday in Pioche, NV. He was born in New Albany, IN, to James W. Robinson (deceased) and Patricia Busby. He graduated from Floyd Central HS in 1977 and went on to graduate from Purdue University in 1981 with a BA in Aeronautical Engineering. He was an entrepreneur in Aviation and a Visionary Man and a World Traveler. Along with operating several companies as Owner, President and Chief Pilot, he also had several ongoing cutting-edge projects. One thing he frequently quoted was, “You can be a pioneer or a settler and I choose to be a pioneer” and he certainly was.

Also survived by his mother, Patricia Busby (Arthur) and step-mother, Phyllis Robinson; four sisters and five brothers, along with numerous nieces and nephews.

Funeral service will be Tuesday, August 11, 2020 at 11:30 a.m. with visitation prior to service. Service to be held at Grace Lutheran Church in New Albany, IN with burial to follow at Kraft-Graceland in New Albany, IN.

Expressions of sympathy in honor of Jim to Challenge Air at challengeair.org. With over 17000 hours of flight time in the air he never lost his passion to pass on his love of aviation to the next generation.

THE CHURCH IS PROVIDING AN ONLINE VIEWING OF THE SERVICE AT 11:30 AM ON THE FOLLOWING LINKS:
https://glcna.online.church

Carly Grace Landis, daughter of Josh & Shelby (Garber) Landis was received into the family of God through Holy Baptism on Saturday, August 8 in a private ceremony.

Our friend and brother, Dennis Hawkins, died on August 4. His body was willed to U of L’s medical school, but a memorial service is planned for this Sunday, August 9, at 4:00 pm. Visitation will precede the service at Grace Lutheran from 1:00 until 4:00.

Dennis was the long-time football coach at Clarksville High School. We will keep his wife, Pam, and his daughter, Wendy Foster, and his son, Jason, and their families in our prayers.

THE CHURCH IS PROVIDING AN ONLINE VIEWING OF THE SERVICE AT 4 PM ON THE FOLLOWING LINKS:
https://glcna.online.church 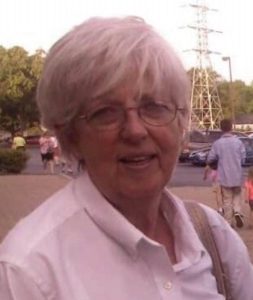 Passed away Tuesday at U of L Hospital. She worked as a sales clerk at Dillard’s and Bacon’s and was a stay at home mother. She was also a longtime member of Grace Lutheran Church.

She is preceded in death by her parents – Robert and Goldie Schamel, son – Douglas Hilton and daughter – Rebecca Hilton.

Visitation will be at Grace Lutheran Church (1787 Klerner Lane, New Albany, Indiana 47150) on Friday from 10:00 am -1:00 pm with service to follow at 1:00 pm. Interment will be at SCI Kraft-Graceland Memorial Park. Masks are required.

She is preceded in death by her brother, Doug Hilton.

Visitation will be from 10:00 am to 12:00 pm on Tuesday, July 7, 2020 at Newcomer Cremations, Funerals & Receptions (3309 Ballard Lane, New Albany). She will be laid to rest at New Chapel UMC Cemetery in Jeffersonville. 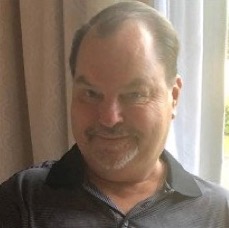 Mike was born to the late Cecil and Lillian Yates in Louisville, KY. He was the owner of Industrial Belting and Transmission and was a member of Grace Lutheran Church in New Albany.

He is preceded in death by his parents; and sister, Wanda Thurmond.

Memorial Service for Mike will be at 3 PM on Sunday, July 5, 2020 at Ratterman & Sons Funeral Home, 3800 Bardstown Road. Memorial Visitation will be from 12-3 PM on Sunday at the funeral home.
< 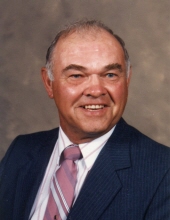 Robert Junior Kischnick, 90, of Vassar died early Wednesday morning, July 1, 2020 at Covenant Glen in Frankenmuth. He was born July 13, 1929 in Saginaw, son of the late Robert F. and Mildred (Ruff) Kischnick. Bob served his country as a Medic with the U.S. Army during the Korean War from 1951-1953. On May 20, 1951 he married the former Verna M. Mossner in the St. Michael’s Lutheran Church in Richville. She predeceased him February 1, 2016. He was a lifelong member of St. Michael’s Lutheran Church and served the church on various church boards. Bob was a member of the Richville Conservation Club and served on the Board of Directors and also as its President for many years. He also was a member of the Alvin F. Miller American Legion Post #400 in Richville. Hunting was Bob’s passion, but he also enjoyed playing euchre, and listening to polka music.

Funeral Services will take place at 12 Noon Monday, July 6, 2020 from St. Michael’s Lutheran Church in Richville. Reverend Wesley Gillaspie will officiate with Committal Services to follow in the St. Michael’s Cemetery. Military Honors will be presented by the U.S. Army Honor Guard and the Alvin Miller American Legion Post #400. Mr. Kischnick’s family will receive friends at the church on Monday from 10 a.m. until the time of the services.

Those planning an expression of sympathy are asked to consider St. Michael’s Lutheran Church.

Funeral arrangements have been entrusted to the care of the Ware-Smith-Woolever Funeral Directors, 9940 Saginaw St. Reese, Michigan 48757 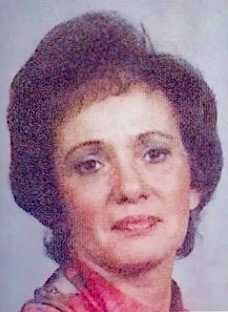 Betty Jean (Greene) Freeberg, 89, of Floyds Knobs, Indiana, passed away on Friday, February 28, 2020. She was a member of the Eagles Club and Grace Lutheran Church in New Albany.

She was born on March 7, 1930, in Lebanon, Indiana, to the late Carl and Ida (Honaker) Greene. Betty was also preceded in death by her husband, Kenneth Freeberg; and sons, Donald “Skip” and Daniel Pennington.

Visitation will be from 11:00 a.m. to 1:00 p.m. on Tuesday, March 3, 2020, at Newcomer Cremations, Funerals & Receptions (3309 Ballard Lane, New Albany) with her funeral service taking place at 1:00 p.m. Private burial will take place at a later date at Mount Tabor Cemetery in New Albany. 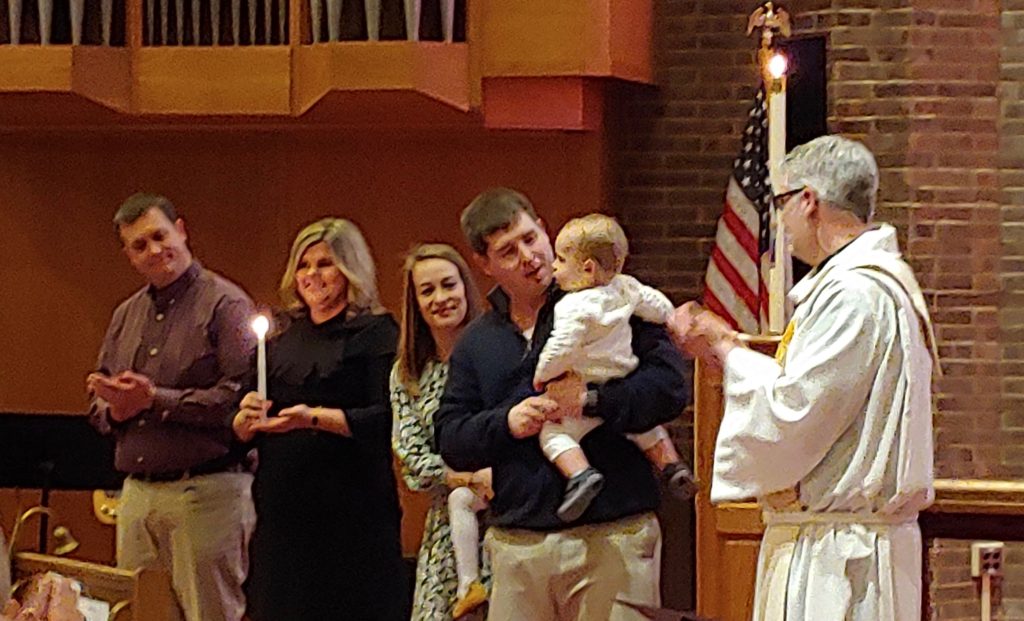 Received into the family of God through Holy Baptism at the 5:00 p.m. worship service on Saturday, February 15, 2020. 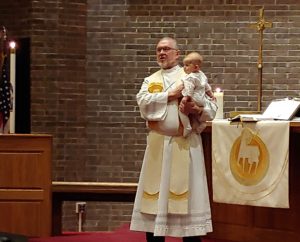 Received into the family of God through Holy Baptism on
Saturday, January 25 during the Saturday worship service. 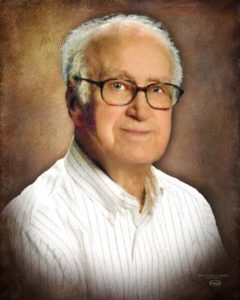 Online condolences may be made to: www.kraftfs.com 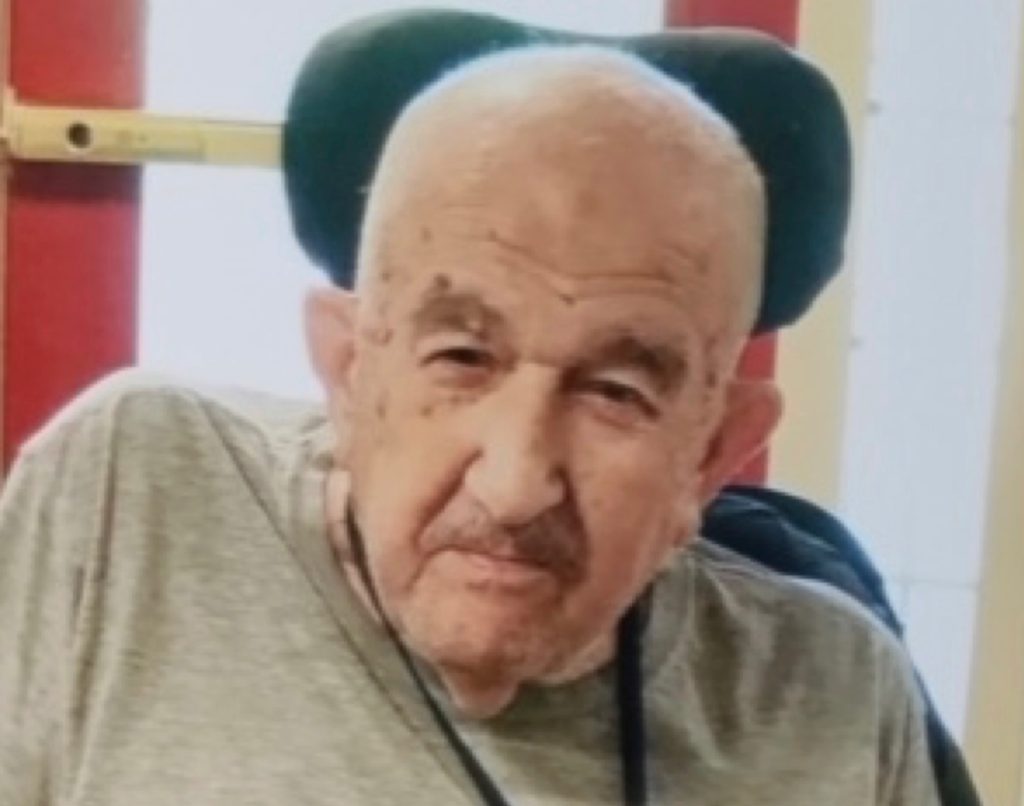 Everett Elwood Reisert Sr., passed away Monday November 4, 2019 at Baptist Health Floyd Hospital. He was born in Greenville, Indiana and retired from the New Albany Street Department after more than 50 years of service where he served as the Assistant Street Commissioner. He was a member of the Coon Hunter’s Club, the Democratic Party and Grace Lutheran Church. He was preceded in death by his wife: Elnora Ruth “Pat” Reisert.
Survivors include:

A Celebration of Elwood’s life will be held at 10:30 AM Friday November 8, 2019 at Grace Lutheran Church (1787 Klerner Ln.) with burial in SCI-Graceland Memorial Park. Visitation will be at the Oak Street Chapel of Naville & Seabrook Funeral Homes(1846 E. Oak St.) from 3 – 7 PM Thursday.

Memorial Contributions may be given to Grace Lutheran Church. 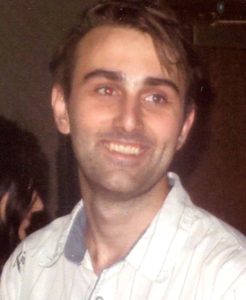 Thomas Michael Kummer, 28, passed away Friday, October 25, 2019. He was born in Midland, Texas and moved to Indiana in 1996. He was a 2010 graduate of Floyd Central High School, attended Indiana University Southeast and graduated from Indiana University Bloomington in 2015 with a degree in geology. Post college jobs included Paraklese Technologies in Georgetown IN, supervisor at UPS in Louisville KY, mud logger at MCWL in Oklahoma, and well site geologist at Excellence Logging in Ohio. His hobbies included fishing in North Dakota, shooting sports, mechanics, motorcycling, and Nixie tube clocks. He placed 3rd in the Grand American National Trap Shooting Championship in 2003.

Online condolences may be made to www.kraftfuneralservice.net. 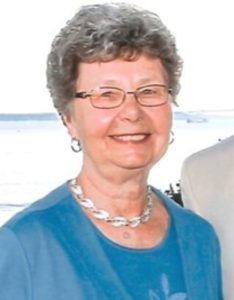 Lynne Viola Boone, 82, of Floyds Knobs, Indiana, passed away on Tuesday, October 22, 2019. She attended Valparaiso University and graduated from Iowa State University. Lynn was instrumental in the success of their family’s business, Ridgeview Animal Clinic, in New Albany. She was a member of Grace Lutheran Church, the “10” Homemakers Club, as well as the Indiana State Veterinary Auxiliary, where she served as an officer on many committees at both the district and state levels.

She was born on March 21, 1937 in Chicago Heights, Illinois. Lynne was preceded in death by her parents, Viola and George Wiechen.

Contributions in Lynne’s memory may be made to Grace Lutheran Church Pre-School.