SERMON NOTES
SATURDAY/SUNDAY, January 9-10, 2021 – Pastor Kischnick
THEME: “WHO CAN DO THAT?” TEXT: John 1:1-5
INTRO. The Hebrews seemed so weird! In the ancient world: an anomaly, a singularity. Neighbors, enemies, and conquerors: Jews were weird. Pilate as Governor-not a plum assignment. Like being ambassador today to Iran or North Korea!
I. PAGAN vs. HEBREW
A. Many gods v. ONE God:
1. Polytheism: many, families, hierarchy, like humans!
2. Monotheism: One God of whole universe; a being utterly different
than human beings.
B. creation v. Creator: (Still so today!)
1. Pagan: creation of world incidental/accidental
a) warfare/violence b) sexual c) for amusement
2. Pagan: gods are part of creation, therefore nature gods
3. Hebrews: One Creator of everything, above creation, creates with
purpose & by design.
C. A Moral God:
1. Pagan: gods capricious, self-centered, used humans as pawns/fun
2. Hebrews: God reveals self/his will by his Word, his Law, his Love
3. He governs his own behavior by right/wrong, good/evil
II. WHO CAN DO THAT?
A. Old Testament: Flood, Babel, Sodom, Isaac, Plagues, Red Sea, Manna,
Jericho, Assyrian plague, Daniel, Fiery Furnace
B. New Testament: John’s birth, Incarnation, Virgin Birth,
“Pax Romana”, Census, Star
C. Jesus: “SIGNS” > water/wine, still storm, walk on water, heal sick,
blind, deaf, lame, raise the dead…EASTER!
D. “Who can DO that?”
E. Answer: Only the Creator! Only God! Only the Christ!
III. AND SO IT BEGINS…
A. At His baptism: “You are my Son…”
1. Who can DO that? Like Father, like Son!
2. Same essence, same mind, same power, same purpose
B. He LOVES those He has created:
1. He’s come “to fulfill all righteousness”.
2. He’s “the Lamb of God who takes away the sins of the world.”
3. The CREATOR who lays down his life for his creatures.
C. Who can DO that? Only God! Only Jesus! 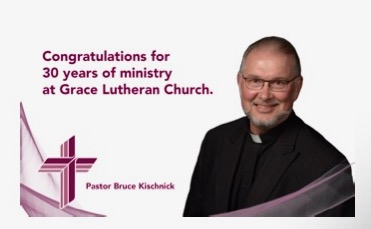 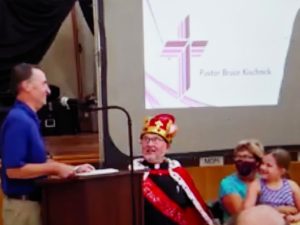 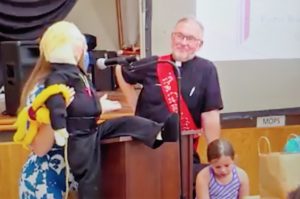 My Dear Friends in Christ,

A heartfelt word of appreciation to you for your love, your gifts, your kind words, the luncheon, the video, the barrel of monkeys, the ape-filled chocolate kiss, the flowers, the “Tiny Bruce” song, the Tiny Bruce that’s in my office and creeps me out, and 30 years of your partnership in the Gospel. There’s nowhere else I’d rather have been and no people I’d rather serve. I am privileged to be your pastor, and I love you all!

I thank God every time I remember you in my prayers…” and I pray for your continued health in faith and in life.